Are you interested in supporting your local council in recognising and responding to the climate emergency? Join one of our active campaigns or help start one in your area to get your council to move to a Climate Emergency Declaration (CED).  Darebin Council was the first council worldwide to pass a motion to this end in December 2016. 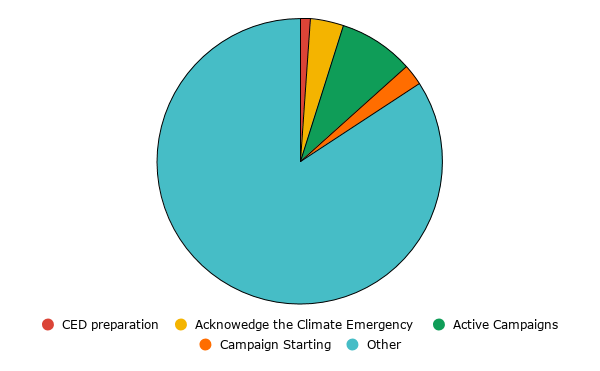 
Active Climate Emergency Declaration Campaign The Moorabool campaign is being run by Lindsay Watters. Lindsay has started by talking to Councillors and key council staff about declaring a climate emergency. Lindsay is keen to for other people to help the Climate Emergency Declaration campaign in Moorabool.  Please contact Lindsay via email latspt @ gmail.com or mobile 0418 150 599.  We now have an active campaign in Geelong and Surf coast with regular meetings. Please contact Alex if you are interested in getting involved via their facebook page  A campaign has started to get Knox to declare a climate emergency through the Knox Climate Action Now.  Contact KCAN via their facebook page https://www.facebook.com/KnoxClimateActionNow/ or email knoxclimateactionnow@gmail.com. Ballarat has passed a motion recognising the climate emergency. We need to ensure they commit to the strongest action. A local group is driving this campaign. Contact CACE if you would like to get involved (communityactionclimate@gmail.com). A local group is driving this campaign. If you would like to get involved contact kira.whittaker@outlook.com ​There is an active campaign to convince councillors to declare. Contact Maddy Butler, madeleine.d.butler@gmail.com Contact ​​"Malcolm Robins" malcolmr@mpec.com.au
​
Campaigns we are looking to get going
If you are interested in helping get a campaign going in these or any other councils, please get in touch with Adrian Whitehead, at communityactionclimate@gmail.com.

Local Government Association Campaign On 12 May 2017 Darebin Councillor Susan Rennie took a climate emergency motion endorsed by Darebin Council to the Municipal Association of Victoria, which was supported by 77% of Victorian Councils.
The motion was as follows,
"That the MAV recognise that: (a) we are in a state of climate emergency that requires urgent action by all levels of government, including local councils
(b) human induced climate change stands in the first rank of threats to humans, civilisation and other species
(c) it is still possible to restore a safe climate and prevent most of the anticipated long-term climate impacts – but only if societies across the world adopt an emergency mode of action that can enable the restructuring of the physical economy at the necessary scale and speed;
(d) the MAV has a particular role in assisting local governments in this regard." The next step will be to get the MAV to adopt a Climate Emergency Declaration as a formal campaign of the MAV By 2022 a campaign goal will be to get the MAV to adopt a Climate Emergency Declaration as as a key commitment  of the MAV for the 2022 State election campaign and get MAV drop references to suicidal targets such as "Local government supports the Victorian emissions reduction target of net zero emissions by 2050 and the 40 per cent renewable energy by 2025 target." as outlined in the 2018 as outlined in the call to parties document .